Rosa No-Name leaves her tiny Mexican village a rejected, illiterate, pregnant sixteen-year-old and returns at twenty a mature, highly literate woman. Can she forgive the villagers for the way they mistreated her as an unwanted orphan and help them find a way to survive? And will she find the God she’s been seeking?

Rosa No-Name is the prequel to the Altered Hearts young adult book, Found in Translation. It’s a coming-of-age novel that requires no familiarity with Found in Translation despite a small overlapping of the stories being told from opposite points of view.

I can’t believe you are eighteen now and attending an American college. How quickly the years have passed.

Although I clearly remember every detail of your birth, other facts about our life together would have been lost forever without the journal Dr. Morales convinced me to keep. You know too well how my journal was almost destroyed and yet lovingly preserved at far too costly a price.

You are familiar with many aspects of my past, some from your own experiences. But you’ve also asked questions that were too personal—too sensitive—to answer when you were younger. I didn’t think you could handle that much truth yet.

You’re a grown woman now. A very mature one. I believe you are ready.

I couldn’t tell you these things in person. Regardless of what you might think, I don’t consider myself a very strong woman.

The solution came like an expensive, unexpected present. You have always loved to read. I would give you the details of my history—our history—in writing.

Yes, I could have simply loaned you my journal, but it contains too many gaps. Whenever I look through it, I recall details I failed to include. Important ones.

So I had Dr. Morales get in touch with Señor Roger Bruner for me. You remember Señor Roger, don’t you? He’s the older gentleman who wrote about Kim Hartlinger’s trip to Santa María in Found in Translation. If Nikki hadn’t translated it into Spanish, you and I might never have been able to read it. But he made a few mistakes I would politely point out when we went through my journal together.

If he agreed to help, that is.

Thank goodness he was delighted at the idea of using my journal as the basis—the skeleton, he called it—of a new book. He would add to it the things Nikki and I remembered, including corrections to his earlier mistakes. Nikki would be especially helpful in recalling things she had said to me in English before she learned to speak Spanish. As well as things I couldn’t have seen or known about.

He flew to San Diego and drove down to Santa María. The roads are much better now, he was pleased to discover, but it’s still a long drive. At least the village has gotten some vestiges of civilization. Like electricity and running water. Occasionally.

After many hugs, he and Nikki and I sat down together to begin. She had already translated my journal into English for Señor Roger, and he recorded our numerous conversations to keep from forgetting anything. Especially the additions Nikki and I made as we went along.

Although he calls this book a novel, one that is “character-driven,” he says it’s actually a memoir about my growing-up years from age sixteen to twenty-nine. That’s why he wrote it in my adult voice, using the language skills I have acquired over the years.

More important than any of that, however, Rosa No-Name will tell you everything there is to know about our family.

As you can see, Señor Roger published this book in English. (How strange not to be able to read my own words!) Since you speak and understand that strange language so well now, you shouldn’t have a problem reading it.

I wanted you to have this, the very first copy. I pray that it will not only answer your questions but entertain you as well. 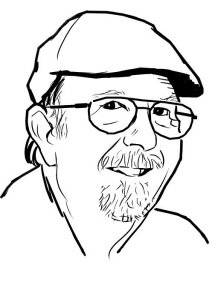 Roger Bruner spent his whole work life trying to figure out what he wanted to do when he grew up. Along the way he taught school, interviewed job seekers, and programmed computers. He retired from a temporary stint at Target to write full-time and wishes he could have done that years earlier.

His first two novels, Found in Translation and Lost in Dreams, are currently out of print but under contract at a new publisher along with the two unpublished books in the Altered Hearts young adult series. His speculative satire, The Devil and Pastor Gus, came out in 2015. His most recent novel, Rosa No-Name is a coming-of-age story that just released on April 12. He’s also published two small books of his shorter writings, Yesterday’s Blossoms and More of Yesterday’s Blossoms.

A guitarist and songwriter, he’s in the church choir and plays bass in the praise team and guitar at a nursing home ministry. Long interested in missions, he’s gone to Romania, England, Wales, Australia, and Nicaragua on short-term mission trips.

Roger likes spending time with his wife, Kathleen. He has a daughter, who lives with her husband and son in Orlando, and stepdaughters in New York City and Las Vegas.

DISCLOSURE: SOME OF THE LINKS IN THE PAGE ABOVE MAY BE “AFFILIATE LINKS.” THIS MEANS IF YOU CLICK ON THE LINK AND PURCHASE THE ITEM, WE WILL RECEIVE AN AFFILIATE COMMISSION. WE ARE DISCLOSING THIS IN ACCORDANCE WITH THE FEDERAL TRADE COMMISSION’S 16 CFR, PART 255: “GUIDES CONCERNING THE USE OF ENDORSEMENTS AND TESTIMONIALS IN ADVERTISING.”